The following account is taken from a presentation by Peter De Klerk, a theological librarian at Calvin Theological Seminary, Grand Rapids, Michigan in the fall of 1985. His presentation was entitled “Maarten Noordtzij, the President of the Holland-American land and Immigration Company ‘The Boldest of Swindles, 1893, The Alamosa Disaster’ “.

“On November 30, 1892, a special train arrived at the Alamosa railroad station, and twenty-eight families emerged from six passenger cars. The parents, their 116 children, and another 31 single adults augmented Alamosa’s population of 1,000 by nearly a quarter.” Peter de Klerk explains that a gentleman by the name of Albertus Zoutman came from Rotterdam, Netherlands to Denver in 1891. He then joined forces with Willem C. Van Dusseldorp to purchase 15,000 acres from Theodore C. Henry, president of the Empire Land and Canal Company. Zoutman then returned to the Netherlands with samples of wheat, oats, barley, peas, and sugar beets to be displayed in the city of Utrecht. On August 18, 1892 the Holland-America Land and Immigration Company was incorporated in the Netherlands. 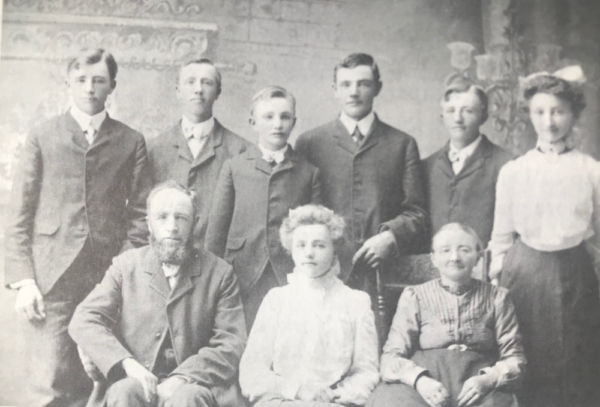 Zoutman described the Alamosa area as not too warm and not too cold. He claimed that the land was cultivated land and they could expect a good crop of all the vegetables that were grown in Europe. He also told the immigrants that houses would be ready for immediate occupancy.

“Not too long after the arrival in Alamosa, the immigrants discovered that the dazzling prospects were utterly false.” On December 17, 1892 the temperature fell to 30 degrees below zero. The land was still uncut prairie and unsuitable for agriculture due to the alkaline in the soil. Only two poorly constructed wooden buildings were built to house these Dutch immigrants, and were referred by the locals as the “Emigrant Houses”. Due to the close quarters, scarlet fever and diphtheria broke out among the children and 11 children passed away. Because of the dire circumstances, some families moved to Crook, CO in 1893, in the Platte Valley in the northwestern part of the state.

“About thirteen families and a number of single persons did stay in the Emigrant Houses and remained loyal to the Immigrant Company.” These families purchased land from the Empire Company, about 6 miles southwest of Alamosa. On January 4, 1893, a special train transported their goods to their new homes to the area that became known as the Empire Farm. Several buildings with stables and a school house were built. When the community grew and became more prosperous, the community became known as the Waverly District. The other 15 families moved back to the Netherlands or to Crook, Colorado or to other places in Kansas, Nebraska, Iowa or west.

Some families still living in the San Luis Valley whose last names are from these Dutch immigrants include the Van Iwaarden, Hof, Tolsma, Wiescamp, Ottenhof, Heersink, Fransen, Schneider, Schooland, Crowder and Van Geeson; to name a few. Their journey was a disaster; but, eventually was a blessing to the San Luis Valley’s diversity of people and cultures.