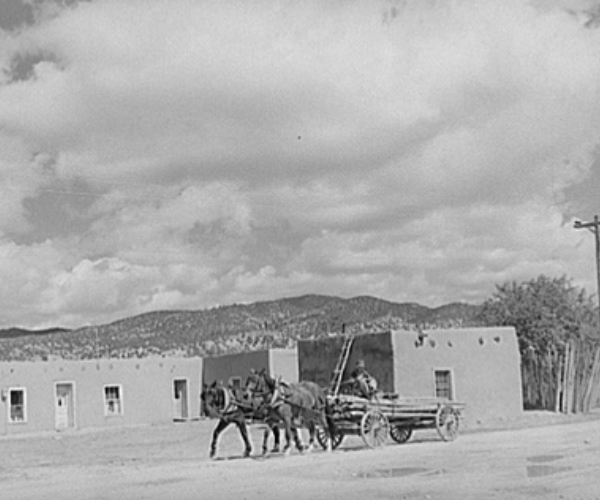 As the Treaty of Guadalupe-Hidalgo promised to respect the language, religion, and property of the Mexican people within this newly acquired territory, settlement of the San Luis Valley finally began. However, the United States did not automatically reassert the Mexican land grants and the original grantees were required to petition their claim – a process that took several years and ended with mixed results. Despite this uncertainty, the first recognized permanent settlements in what is now Colorado were established within the Sangre de Cristo Grant along the Rio Culebra. These include Plaza de los Manzanares (now present-day Garcia) in 1849, San Luis in 1851 (recognized as the oldest continually occupied settlement in Colorado), and San Pedro in 1852. Additional early settlements in the Rio Culebra valley include San Pablo (1853), San Acacio (1856), and San Francisco, or La Valley (1855).

It was just south of San Luis that the settlers first constructed several acequias (irrigation ditches) to distribute water from the Rio Culebra to their fields. The San Luis Peoples Ditch #1, which was constructed in 1851, is the first recorded water right in Colorado. Other ditches followed: the San Pedro Ditch and Acequia Madre Ditch, also in 1852, the Montez Ditch (1853), the Vallejos and Manzanares Ditch (1854), and the Acequiacita Ditch (1855).

The Rio Culebra settlers laid out their farms in varas, long narrow strips. They ranged anywhere from 55 feet to one thousand feet long, depending upon the size and importance of the families receiving the plots. East of San Luis, a vega, or communal pasture, of nearly 900 acres was given to the families.

It was not until 1854 that Indian hostilities ceased and permanent settlements were allowed to establish within the Conejos Grant. In the fall of that year Jose Maria Jacques together with Lafayette Head and more than 50 other families from Abiquiu and El Llanito began the settlement of Guadalupe, near the present town of Conejos. It was here that they built Colorado’s first church, Our Lady of Guadalupe, and helped establish the first and oldest Catholic parish. Here each family was also allotted a long, narrow strip of land for cultivation. These long plots extended from the river for irrigation to the foothills and mountains for pasture and timber land, but measured only about 500 feet wide. They eventually filled most of the irrigable land between the San Antonio River and La Jara Creek. As stipulated in the proclamation, pastures and watering places would be held in common, and roads in and out of town would be public.

Additional settlements of Servilleta and Mogote followed in 1854, and two irrigation ditches, the Guadalupe Main Ditch and the Mills Head Ditch, were built in 1855. Others followed on all of the neighboring tributaries. By 1855 there were 11 ditches bringing water from the valley’s rivers to the fields. By 1857 nine more were added.

As time passed, settlement spread northward. La Garita and La Loma (near present-day Del Norte) were settled in 1858 and 1859. Across the valley, Zapata was settled in 1864 at the western base of Sierra Blanca. By the early 1860s these Hispano settlers had transformed the valley into an area typical of rural northern New Mexico with architectural styles and settlement patterns following in the tradition of Spanish and Mexican villages.

Each settlement typically was established near a creek and built around a central plaza or square, with corrilleras or linear arrangements of contiguous homes facing each other along a road. These corrilleras were separate from the plazas. Less formally clustered placitas (places – originally a diminutive for plaza) also appeared in some settings operating as an informal hamlet containing a few families. Settlement continued in this tradition: Some of the new settlements on the valley’s grants continued to be made by people from New Mexico. On the west side, between the Alamosa and La Jara Rivers, Capulin, meaning “chokecherry” was established in 1867 by people from Ojo Caliente, and La Jara was settled on the south side of the latter stream at about the same time. Plazas around La Loma expanded to the north, while Ortiz and San Antonio began to prosper in the corner of the valley south of Conejos. To the east, Ojito on Trinchera Creek and to the north Rito Alto appeared. Nearly every stream with the San Luis Valley had at least one settlement of Spanish-speaking people.

Beside the living quarters, a compound usually contained other farm related structures like barns, sheds, granaries, walls, fences, corrals, storage facilities and shelters. The earliest structures were jacales, which were built of vertical logs plastered with mud, and typically replaced by more permanent adobe built low to the ground. Religious structures included churches and moradas, a Penitente meeting house, and cemeteries.

In 1860 Congress confirmed the Sangre de Cristo Grant, but adjudication of the Conejos Grant was held up by the surveyor general of New Mexico. Documents regarding the grant were not received in Colorado until 1867, six years after the new territory was created. It was 1900 before the Court of Private Land Claims heard the arguments and dismissed the petition on the grounds that no evidence of the original 1833 grant existed, and that the governor of New Mexico had expressed doubt regarding his own authority to grant possession. As a result, many of the early settlers of the Conejos Grant eventually lost their land when it was opened for homesteading.

Following the Homestead Act of 1862, new settlements within the valley conformed to the township, range, and section pattern of development, with farmsteads being partitioned on a 160-acre grid.