The Spanish government sent 5 enrtradas to the north from 1540s to the 1590s to explore and look for gold. They kept excellent journals and traveled as far north as the San Luis Valley. Don Juan Oñate led the fifth entrada and arrived in the Española Valley in northern New Mexico, in the Northern Rio Grande National Heritage Area in 1598. During the 17th and 18th centuries, expeditions were made up into the current day Sangre de Cristo National Heritage Area in southern Colorado. One of the first historic expeditions was by General Don Diego de Vargas in 1694, when the Royal Army camped at Rio Culebra and forded the Rio Grande. They resisted of an early morning attack by 300 Utes and made peace before camping at Rio San Antonio. Many expeditions came after: Captain Juan Rivera, Governor Bautista Anza and Zebulon Pike among them.

In the 1830’s the Republic of Mexico was making land grants on its northern frontiers. The first two grants given in today’s San Luis Valley were the Sangre de Cristo Grant on the east side of the Valley and the Guadalupe-Conejos on the west. In 1849 Atanasio Trujillo brought his people from El Rito and permanently settled in a place they would call Los Rincones(the corners). By Spanish custom, land was allotted to the head of each house in strips called varas and used acequias(ditch systems) to irrigate the lands. People raised sheep, goats, cows and horses, gathered wood, medicinal plants and other things necessary for survival.

By 1867, there were more than (30) thirty placitas and a population of about 6,000 in the Valley. Religion and family was at the center of it all. The first priests to be assigned to the Valley were Padre Montano and Padre Vigil in Conejos in the late 1850’s. The Nuestra Señora de Guadalupe Church (Our Lady of Guadalupe) was completed in 1854 and still stands in  today, along the Los Caminos Scenic and Historic Byway. The people had moradas to use, since the priests made only occasional rounds. Religious stories were told of the saints of the Catholic traditions, los santos(the saints), and carvings called santos were common. The people of las placitas said, “that is one whose blessing I seek, that is who I wish to be like.”

The United States ceded the area in 1848, after the Mexican-American War. 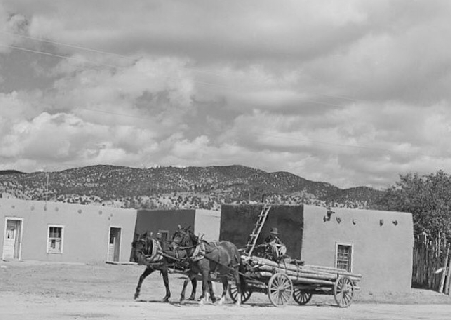 Since their establishment in 1851, the villages of the Rio Culebra of Costilla County, and their associated cultural landscapes have been representative of early Hispano settlement in Colorado. Elements of the Culebra village cultural landscape include domestic, religious, and agricultural buildings, long-lot field patterns, or, gravity-based irrigation ditches(acequias)and a community pasture(la Vega). Nestled high in the eastern foothills of the San Luis Valley, the Sangre de Cristo Mountain Range forms the eastern boundary for the Rio Culebra. To the north is Mount Blanca, also known to the Navajo as White Shell Mountain. Directly south is Taos County, New Mexico and to the west is Conejos County, Colorado. The lifeblood of the region, the Rio Grande del Norte, as it flows into the southern edge of the San Luis Valley, is the dividing line between Conejos County and Costilla County.