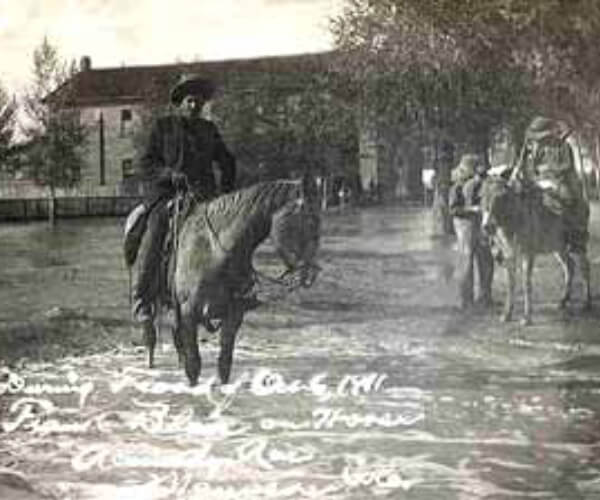 With the extension of the railroad into the San Luis Valley, an established network of feeder roads, and improvements in irrigation technology, agricultural development began to progress rapidly in the 1870s and the population of the region boomed. Practices soon shifted towards larger farms and ranches owned and operated by Anglo-American migrants who acquired much of the wealth in the valley. Many areas of the valley were opened to farming for the first time by
these settlers. Other sections of the valley saw a retreat of Hispano influences. The Medano Ranch, for example, was assembled gradually through the Dickey brothers’ purchase of Hispano farms. Its 130,000 acres were eventually sold in 1882 to New York investors who developed the largest cattle operation in the valley (Simmons, 219). Likewise the large Zapata Ranch was acquired by Texas cattlemen in the 1870s. Some districts, however, particularly in the south, maintained their Hispano identities that are reflected in the landscape today.

Other small settlements were established throughout the San Luis Valley through land speculation associated with the railroad and agricultural development. These platted rail towns, or “New Towns” as they were called, included Mosca, Mesitas, Blanca, New San Acacio, Jaroso, Antonito, and Romeo. For instance Mosca was established in 1881 through the Mosca Land and Farm Company to provide land for tenant farmers. Blanca was established in 1908 by the San Luis Valley Land Company and incorporated in 1910. New San Acacio and Mesitas were both developed by the Costilla Estate Development Company in the early 1900s. The Seventh Day Adventist Church established a colony at Jarosa with a cooperative farm in 1914 after a San Luis Southern Railroad depot was built there in 1910. Romeo was platted in 1901 by Zeph Felt, a land developer from Dever.

Mineral speculation led to the development of mining towns in the San Juan Mountains. Platoro, taking its name from silver and gold ore, was established in the 1880s. Although the gold rush primarily targeted the San Juan Mountains farther to the north and west, those mining camps and settlements created tremendous demands for food that farmers and ranchers in the San Luis Valley were well positioned to satisfy.

Lettuce, spinach, peas, and cauliflower were important vegetable crops being shipped from the valley; barley, beans, oats, and hay were also produced extensively. Cattle and sheep raising also grew to be important industries. Entrepreneurs soon established mills, warehouses, and other types of facilities related to the logistics of moving, storing, and processing agricultural products. Because of the great distance between the San Luis Valley and urban markets, farmers needed to pack the most perishable vegetable in ice to reduce spoilage. Doing so required the construction of packing sheds, ice houses, and crate-making facilities. As commercial potato production also increased during the first half of the 20th century. Hispano farmers constructed soterranos, or large underground cellars, which helped to maintain even temperatures and keep the potatoes from freezing. Anglo farmers adopted these Hispano construction techniques and build above-ground storage facilities made of double-wall adobe.

Cheap and abundant labor was needed to work these farms, and farmers began to hire local Hispano-Americans and immigrants from Mexico as day laborers as the vegetable industry expanded. These workers built small adobe homes near the towns where they worked. In 1909 the Costilla Estate Development Company encouraged Japanese, who wished to emigrate from California, to work the farms on the estate. Some came as tenant farmers, while others moved into a cooperative colony called Culebra Village. These Japanese farmers perfected the practice of truck farming in the San Luis Valley, specializing in cool weather crops like spinach, lettuce, cauliflower, and broccoli that were well suited to the valley’s cool summers. Many settled in the area of Jaroso and San Acacio and around Blanca and Fort Garland. Within a decade they expanded their agricultural land holdings from 53 acres in 1919 to more than 10,000 acres.

Other ethnic and religious groups also played a role in the settlement of the valley. In 1879 Mormon settlers seeking religious freedom established the town of Manassa. In their surrounding fields the Mormons grew wheat, field peas, oats, and alfalfa. Eventually they went on to establish Morgan and Sanford.

In 1876 T.C. Henry and his Colorado Loan and Trust Company created demonstration farms to lure land speculators and participated in the construction of the Rio Grande, San Luis, Monte Vista, and Empire canals, all in the western portion of the valley. Although Henry and his investors were not successful, farmers benefited from the construction of these irrigation systems and eventually came to control them through local cooperatives. Artesian wells were drilled to tap the underground aquifer beginning in 1887. Within the next decade about three thousand were drilled.

These important changes in the scale and technology of irrigation greatly expanded the number of arable acres in the valley. These changes also influenced the distribution of wealth. Traditional acequias were restricted to short laterals that served nearby bottomlands. The new ditches reached higher benches and the artesian wells watered lands wherever drilling succeeded.

After the financial panic of 1893, agricultural prices dropped and coincidentally a severe drought began. Irrigation canals dried up, except for the Rio Grande Canal, which took almost the entire flow. During this period of depression, many farms failed and farmers fled the valley in search of more reliable sources of water. Several of the small communities disappeared.

During the early 1900s too much water became the problem, as irrigated lands near Mosca and Hooper became waterlogged and alkaline. The result was widespread abandonment of more than 300,000 acres in the valley’s center between 1890 and 1920 (Wyckoff, 203). Smaller scale versions of the problem appeared elsewhere in the valley.

The longest dry spell recorded in Colorado’s history spanned the entire decade of the 1930s. With the land already stressed ecologically, and the Great Depression further crippling much of the region, the agricultural market plummeted. Many farmers simply abandoned their holdings and left the area, leading to further attrition of communities.