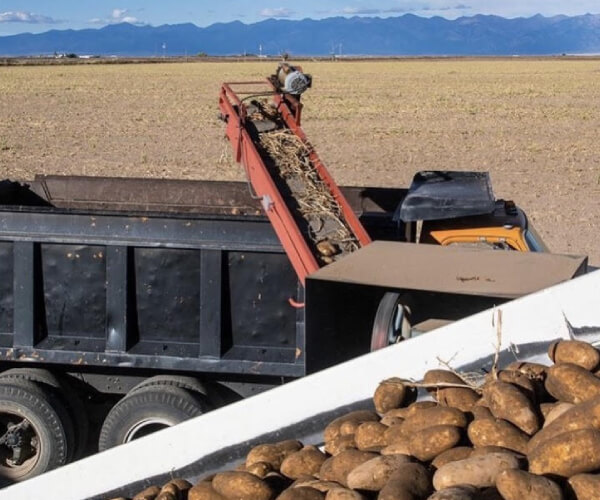 As had been the case throughout the first half of the 20th century, the economy of the heritage area throughout the second half was inextricably tied to water. In the 1950s mechanized center pivot irrigation began to alter the agricultural practices of the valley. Pivot irrigation is less labor intensive, and – because it relies on water from the aquifer – more reliable. This system is based on a well being in the center of a field and an irrigation pipe mounted on wheels gradually moving in a circle around the well.

The primary feature of the San Luis Valley Project is the Platoro Dam and Reservoir, located on the Conejos River about one mile west of the small town of Platoro. The dam was built in 1949 to control floodwater and provide supplemental water to irrigate approximately 73,890 acres of land in the Conejos Water Conservancy District, 40 miles away. In the Closed Basin Division, the Closed Basin Drain salvages water from the basin via wells, pumps, laterals, and canals, and transports that water to the Rio Grande for use elsewhere.

All operations of the San Luis Valley Project are subject to the provisions of the Rio Grande Compact of 1938 regulating the development of the waters of the Rio Grande north of Fort Quitman, Texas. The compact establishes regulations concerning the quantity and quality of water delivered to the New Mexico state line. This is done through a schedule of delivery based upon the inflow and outflow of water in the San Luis Valley for the years 1928 through 1937. Under the compact, storage projects in Colorado may only store water in excess of the amount required for delivery to the New Mexico state line. If the schedule is not met, it results in a debt that must be repaid in subsequent years.

Today the crops grown within the northern portion of the heritage areas are mainly potatoes, wheat, native hay, and alfalfa with some lettuce and spinach as secondary crops. Potatoes, lettuce, and spinach are produced for the national market. Alfalfa is grown for dairy farms in New Mexico and Texas. Coors Brewing Company also purchases 60 percent of its barley from the San Luis Valley to make its beer.

Within the southern portion of the heritage area where Hispano settlement areas and agricultural traditions still dominate, the lands are primarily used for pasture. The Rio Culebra Cooperative in Costilla County represents 52 family farmers and ranchers. In addition to pastured beef, they also market chicos and two kinds of beans (bolitas and havas).