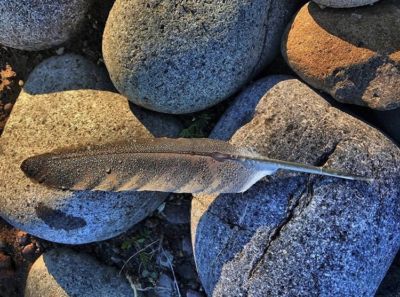 The well worn path that is today Los Caminos Antiguos is know to have been traveled by human beings as early as 8,000 B. C. Archeological excavations in the vicinity of Great Sand Dunes National Park and Preserve and Blanca Peak indicate evidence of Folsom Man, prehistoric people who hunted in the Valley until about 5,000 B.C. At the end of the last Ice Age small bands of nomadic hunters wandered south into this Valley in search of bison, mammoths, and smaller animals. Large bones of the now extinct Bison taylori along with beautiful, fluted points typical of those used by Folsom Man have been found in the San Luis Valley.

Artifacts thought to have belonged to the Yuma culture have also been found in the valley. Yuma Culture, like Folsom Man seems to have stopped coming to the Valley around 5,000 B.C., probably because the animals they hunted migrated out of the region as dry, cloudless skies baked the parched earth and moisture vanished. Animals and humans left the San Luis Valley in search of cooler lands. For the next 6,000 years no humans walked the caminos antiguos of the ancient ones.

Around 1,300 A.D,, Pueblo peoples thought to have been mirgrating from cliff dwellings located at Mesa Verde, Chaco Canyon and Canyon de Chelly visited the San Luis Valley. Historians believe they were drawn to the area by game and fowl as well as large quantities of turquoise. Petroglyphs and pictographs are found throughout the San Luis Valley and the surrounding foothills. Many of the 50 known rock art sites In the Valley are located near ancient migration routes of early people in the area, marking the caminos antiguos which were used long before Spanish explorers found them. Wandering bands of hunters and gathers between 1,000 BC and 500 AD, the Late Archaic Period, recorded animals, humans, curved lines, dots, and grooves in these petroglyphs, whose meanings we may never know. Tewa Indians have oral traditions about hunting in the San Luis Valley and some of their creation myths seem to have begun here.

For more than 10,000 years, longer than any other people, the ancestors of the dark skinned Yutas, “The People of the Shining Mountains,” trekked the high mountain passes. Though fierce in battle, the Utes carried their few belongings on dog-powered travois. By Hispanic times the Utes dominated this Valley, hunting, fighting and raiding with the Apache, Comanche, Kiowa and Navajo. A new enemy appears in Ute petroglyphs of the sixteenth century, with firearms, long spears and the “magic dog” or horse. Captured in thieving raids, the nimble Spanish horse advanced the Utes in commerce and war and changed their culture forever.

Prehistoric natives changed and evolved through the centuries with the most rapid changes occurring as the European cultures reached these lands. The Utes reached this Valley in about the thirteenth century. Different than the tribes of the east plains they were often called the “Dark Ones’ because of their dark skin. They split into several bands: the Capote, Tabeguache, Mouche, Uintah, Weuiminuche, Yamps and Grande Rica. Navajos and Apaches also are thought to have made annual visits to the area, however they did not establish permanent settlements due to the harsh weather.

The Tabeguache established a seasonal pattern of activity in the area. Summer was the season of activity when animals were hunted for food and hides. In the winter months the Valley was extremely difficult to survive so they would return to the Gunnison Valley and they would migrate back in the spring.
The Utes depended on their environment for food, tools and also shelter. Brush huts were constructed in warm weather and teepees were their cold weather homes. Teepees as well as clothing was made from animals skins.

In Ute culture hunting and to some extent war was important. Survival depended on these, so recreation, tribal roles and religion payed tribute to the strength of the hunter and warrior. Religion in the forms of prayer, music or dance was essential. The Sun Dance is the most important religious dance, held annually, it is a prayer for strength and wisdom. Vocal and silent prayer are also important as well as time spent in sweat lodges.
Enemies of the Utes included the Kiowa, Apaches, Arapahoes, Comanches and later the Spanish. Luis de Rosas captured “80 Utacas” and forced them into slavery, beginning the hostility between the Spanish and the Utes. The Utes and Comanches began attacking settlements in Ojo Caliente, Taos and Santa Fe and the Spanish retaliated by attacking at Cerro de San Antonio killing 150 men.

For the Navajo people, who call themselves the “Dineh”; Mount Blanca, “Sisnajiini” or “White Shell Mountain” was their eastern sacred Mountain that defined the eastern boarder of their Navajo land.

Leaders like Chief Ouray wanted calm and peaceful settlements using treadies, both those were easily broken. Eventually the Tabeguache along with other bands of Utes were forced onto reservations and their claim to these lands is a memory.
Recently some land was given back to the Utes in San Luis, in hopes that they can reclaim their ancestry.