Local plants were of incredible importance to Native American tribes and early settlers alike, for both medicinal and nutritional purposes. Hospitals and doctors are a modern day luxury. When this land was settled, people had to rely on the curandero or curandera(healer), sobador or sobadora(chiropractor), partera(midwife) as well as the arbulario, who could reverse spells cast by a brujo or bruja(witch).

The curandero know what kinds of herbs and teas would heal ailments.

Yerba de la negrita(bristly mallow) was given for ulcers Plants high in Iron were given to women after childbirth: yerba de las golondrinas(spurge), altamisa(wormwood) and capulin(chokecherry) Osha was mixed with lard to help heal cuts Rosa de castilla was used for sore throats and oregano with sugar and boiling water was used for coughs.

The fruit of a willow type tree is very important to the cultures of the southwest. It is a small cherry, dark purple or black in color. In late summer, when ripe it is commonly used to make jams, jellies or while by the Spanish people. Indios dried the fruit for winter use. Fruits were pounded into dried cakes, for later use. 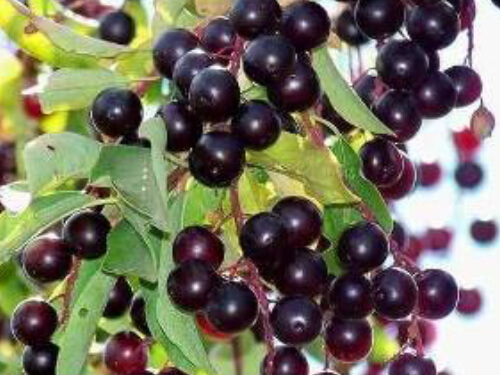 this are similar to garden strawberries but smaller. Fruit can be eaten raw or made into pies, jams or jellies. Leaves are used to brew and excellent tea. L low ground plant with hardy stems showing above ground. Runners are visible; leaves in slots of three; flowers with white petals.

A perennial plant with thick underground rootstocks;stems 3.5 ft to 8ft.; leaves 1/4 inch to 1 inch wide; fruits seed like, bearing hairs, found in marshes. Rootstalks can be eaten at any time; outer peel removed can be eaten raw, boiled or baked. Flour can be made by grinding dry rootstalks; leaves are excellent for weaving, down stuffed into shoes to prevent frostbite. Roots are pounded and mixed with animal fat for burn salve. 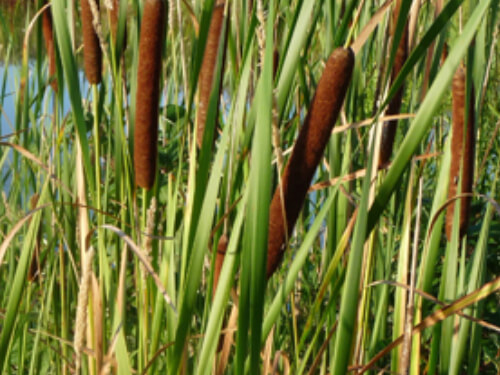 Most generally found in the foothills from 4,500 ft. to 7,500 ft. “Pinion” the seeds produced by this tree are very important to the cultures of the Spanishand Indian people of the Southwest. Source of wood fuel.

This familiar plant grows in gardens and other irrigated soils. During spring it is gathered and the leaves are cooked as greens and sometimes chili seeds are added for more flavor. 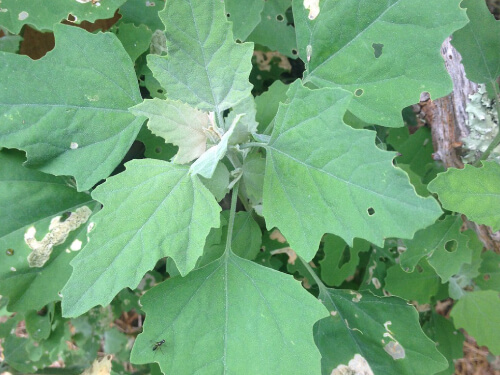 The fruit is the product of the Rosa de Costilla bush. the bush is spinny and produces a beautiful pink flower which forms the Champe. The Champe is used to make jam, jellies and wine. It is a high source of vitamin C. The fruit is picked when ripe at which time it has a deep red color. 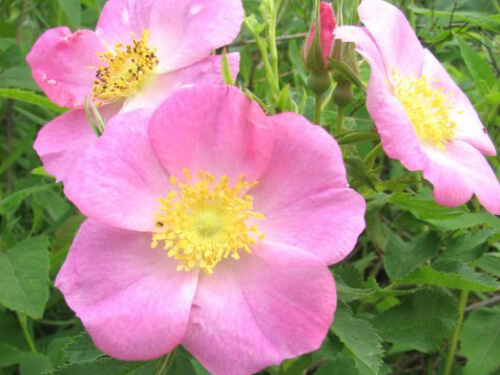 The berries from this plant are tasty and nutritious. The are used for making pies, jams and jellies. The plant is a bush that is found along creek banks or other areas where there is good moisture. The flower bloom in early spring and the fruit is picked in late summer when the berries are a dark purple in color. 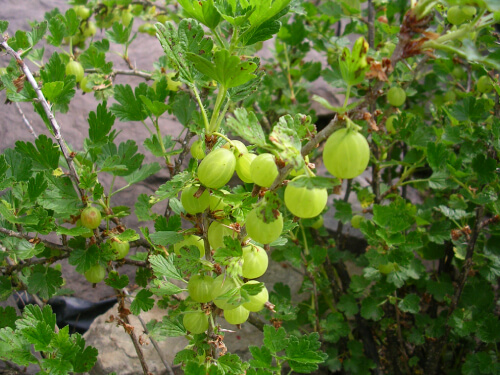 A plant that grows against the ground in mat formation which was used as a form of spinach. These plants must be picked while young and tender. they are fired, onion and chili seed often added for flavor. 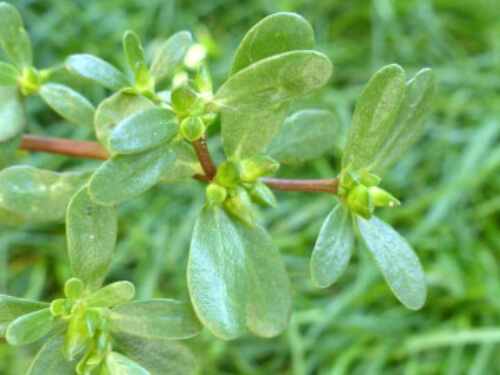 A bright green leafy plant with mint flavor and odor that grows along creek banks and other areas with good moisture. the Poleo plant is known as a cold treatment plant. It is generally gathered in mid summer when it is nice and leafy; it can be used fresh but is most generally dried and stored for winter use. it is most commonly boiled and used as a tea to treat sore throats, fevers and other cold related illnesses. 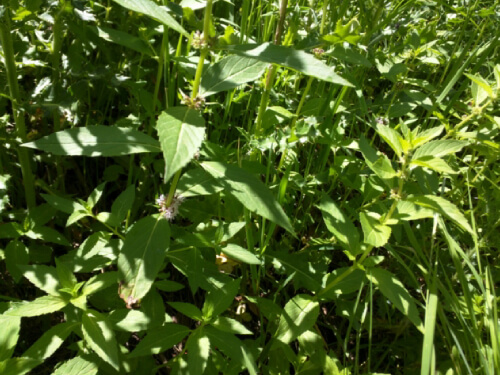 Thick fleshy plant that grows close to the ground, stems in joints bearing many sharp needle spines. This plant grows in dry areas. The fruit can be eaten raw after peeling and removing seeds. Stems are also used raw or cooked. When feed was scarce the early Spanish sheep herders used Nopal as stock feed by burning of the spines with oak torches. 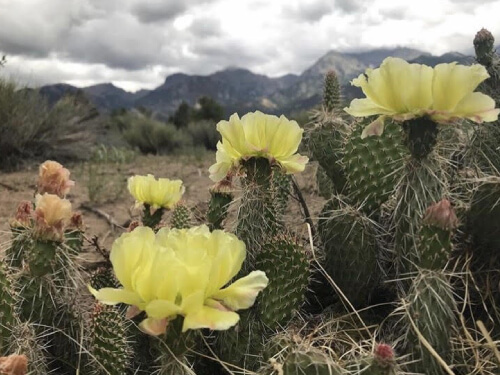 A bush plant growing in clusters, sometimes as high as ten feet, produce small groups of berries which have a sharp lime taste. The berries are used to make lime drink and the roots of the lemita bush are made into a shampoo to prevent baldness. 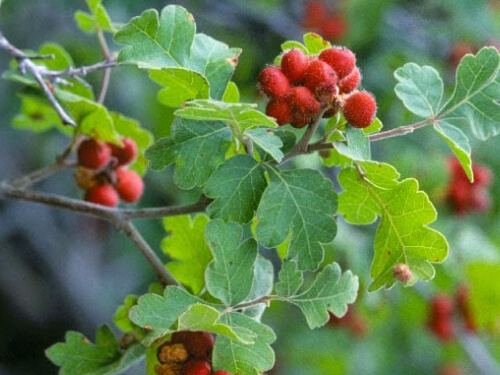 More fully known as Cebillita del Campo is a small plant with onion odor growing underground bulbs 1/3 to 3/4 inches in diameter. Bulbs or leaves used to flavor soups, stews and meats. Juice boiled down to think syrup for colds and throat irritations. Indios used juice on insect bites and as insect repellent. 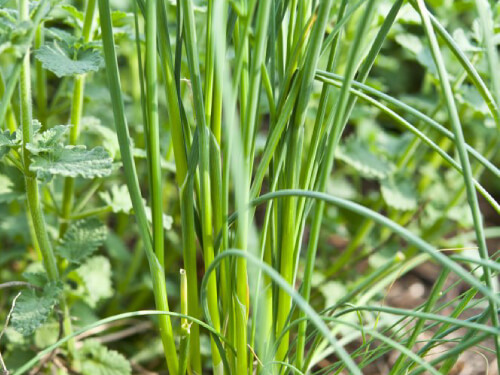 Culturally sacred trees with in the Great Sand Dunes National Park and Preserve, in a place referred to as Indian Grove. There are 72 Ponderosa pines in Indian Grove that show evidence of use by the Ute and Apache Indians, who scarred the trees when they collected the bark for medicine, and over 200 total trees that were used in the area. Some of these trees are over 500 years old and Indian Grove is the only location on the National Register of Historic Places that is woodlands.

The ponderosa pine (Pinus ponderosa) reaches up to 30 meters tall and 1.5 meters in diameter. Its evergreen needles, at 10-20 cm, are longer than those of its other North American relations. It produces cones which bear seeds (nuts), that provide winter food to the animals in the surrounding ecosystem. The Ponderosa is unmistakable with its thick, deeply grooved, rich bark which smells of vanilla and butterscotch.

American Indian tribes would visit the area in the 18th and 19 centuries and peel one side of a ponderosa’s trunk, and use the inner bark for food and medicine. This was done in order to harvest not only the outer and inner bark but the resin and pitch. The bark was used as a building material to make structures and useful items like trays. The resin and pitch was used as adhesives and waterproofing agents. the inner park was pounded and eaten and also used to thicken soups and make tea.

These trees are identifiable by large, oval openings on one side where they were peeled. Tree scars range from five inches to five feet in width and from two inches to nine feet in length with the average scar being seventeen inches wide and four feet long. A scar of that size would yield about one pound of inner bark. One pound of inner bark contains about 595 calories, 2.7 grams of fat, 4.5 grams of protein, and 138.5 grams of carbohydrates, as well as significant amounts of calcium, magnesium, iron, and zinc. 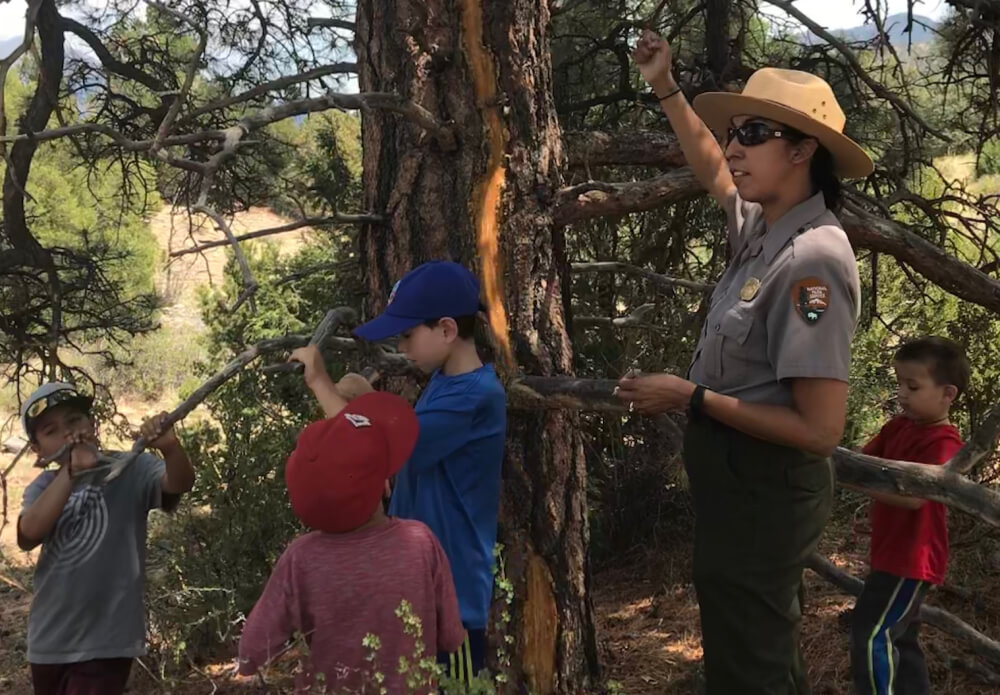 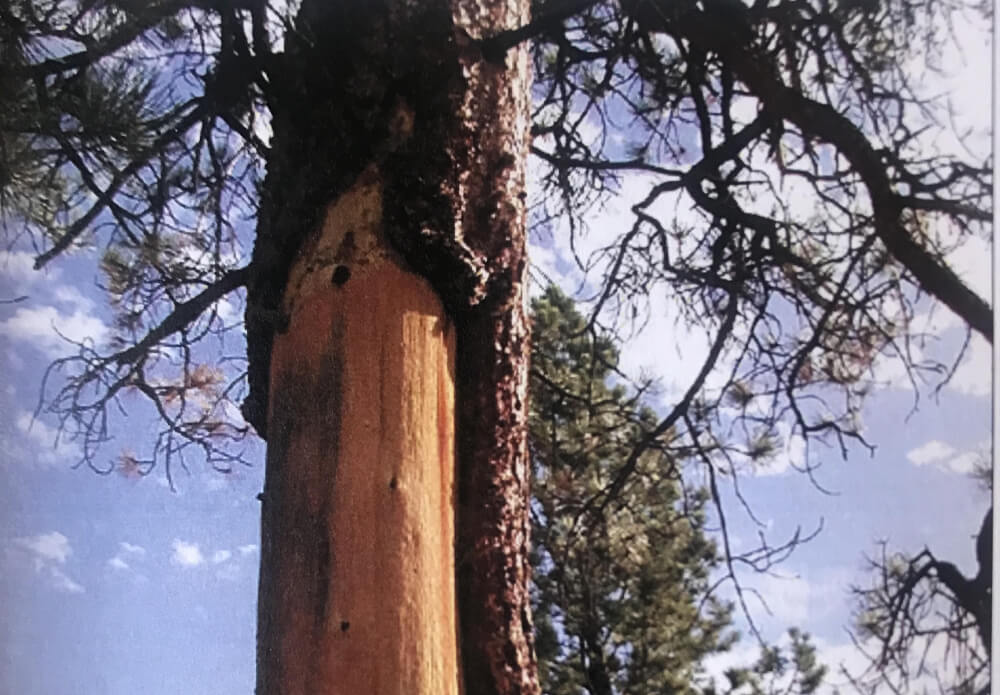