The Sangre de Cristo National Heritage Area (SdCNHA) presented one student with a History Fair Scholarship. SdCNHA provides annual scholarships to students who participate and compete in the Regional History Fair, with projects based on this year’s theme “Debate and Diplomacy: Successes, Failures, and Consequences.” that involve local history, culture, or traditions. 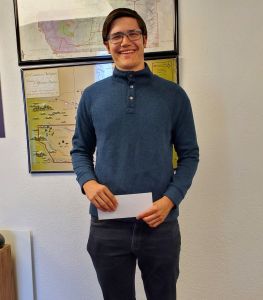 The Regional History Fair took place on Saturday, January 29, 2022 and was hosted by the Adams State University (ASU) Department of History, Anthropology, Philosophy, Political Science, and Spanish (HAPPSS). The Regional History Fair is part one of the National History Day competition that takes place nationwide. Students participate in a project-based learning curriculum that emphasizes critical reading and thinking, research, analysis, and the drawing of meaningful conclusions. Students can complete these projects in groups or as individuals in one of five categories: documentary, paper, exhibit, performance, or website. This year&#39;s round of annual Regional History Day submissions demonstrated the broad array of historical topics but only one pertaining to the Sangre de Cristo National Heritage Area. Winners will precede to National History day, sponsored by the University of Colorado, Denver, on April 30, 2022.

William Lipke performed a skit about Colorado or New Mexico: Debate and Diplomacy in State Borders. He first learned about how Colorado became a state from the book Pleas and Petitions by Virginia Sanchez. He wanted to learn more and began researching. The theme “Debate and Diplomacy: Successes, Failures, and Consequences.” fit this topic well. The diplomacy began between the United States and Mexico and then moved on to diplomatic relations between Colorado and New Mexico territories. There were a few successes that stemmed from the United States’ response to this diplomacy such as some land grants being honored and the developing working relationship between different races in the San Luis Valley. However, many failures resulted from the United States’ and Colorado territory response to these diplomatic measures. The people in this “notch” were denied much of their land, they were not granted their request to be made part of New Mexico, and therefore, the consequences of this action resulted in the people in the San Luis Valley facing discrimination. Some positive consequences brought about by “the notch” being part of Colorado is that the San Luis Valley adds a unique perspective, rich culture, talented people, and the oldest history to the state. The Sangre de Cristo National Heritage Area congratulates all students who participated in this year’s competition and is excited to see what heritage area youth come up with next year. For more information on National History Day, visit www.nhd.org . For more information on SdCNHA scholarships and fieldtrip grants, visit www.sangreheritage.org