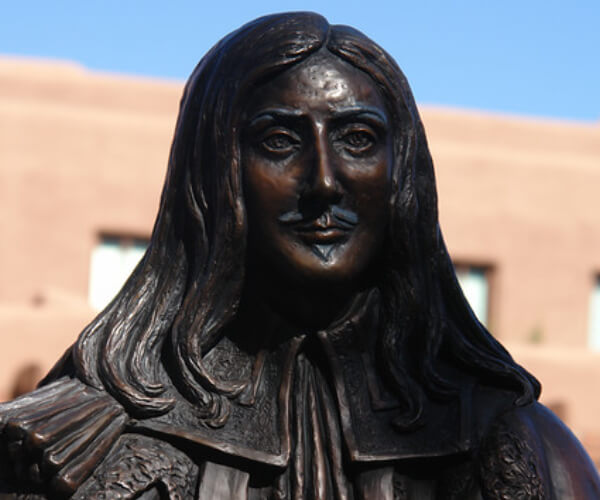 During the period of 1580-1594, there were several Spanish expeditions into northern New Mexico and the San Luis Valley – mostly to look for gold. In late April 1598, Juan de Oñate took possession of New Mexico, claiming all land drained by the Rio Grande for Phillip II of Spain.

In 1694, Diego de Vargas, having defeated the Pueblo Indians and restored Spanish possession of Santa Fe, brought an expedition into the San Luis Valley, travelling north to the Rio Culebra and then south to Costilla Creek.

Other expeditions were conducted throughout the region during the mid-1700s.

* Juan Maria de Rivera set out in 1765 to search the mountains of southwest Colorado for minerals. The party entered the area by way of the Rio Chama, the route that became known as the Spanish Trail. They returned along the Gunnison River, across Cochetopa Pass, and through the San Luis Valley.

* A military expedition organized by Governor Juan Bautista de Anza also travelled north through the San Luis Valley in 1779 to wage a battle against the Comanche.

*Individual Spaniards also made trips into the San Luis Valley to trade with the Utes and to hunt deer.

The San Luis Valley route was followed either along the mountains on the west side of the valley by travelers coming north from Santa Fe or along the Sangre de Cristo Mountains on the east side of the valley. The Rio Grande Gorge dictated this division of routes. The eastern route along the Sangre de Cristo Mountains was popular, and much traffic turned east at the base of Mount Blanca to cross the mountains via Mosca Pass. The western route followed just to the east of the San Juan Mountains and took a northeast arch toward Cochetopa Pass or, curving northeastward, followed a route over Poncha Pass through South Pass and Ute Pass to the Great Plains.

While the Spanish presence within the San Luis Valley was certainly felt by the Utes and other indigenous tribes they encountered, they left little evidence of their adventures. While outposts and forts were located at Sangre de Cristo Pass and other sites in the San Luis Valley, their detailed locations are unknown and no traces of these features have been found. Explorers traveled light and left little. Spanish dominance ended in the region in 1821 with the Mexican Revolution, and in 1822 the Mexican government opened its borders for trade with Santa Fe.