Community members arrived early to find the best seating in anticipation of the performances. Mitchell Jarvies, president of the board for the Sangre de Cristo National Heritage Area took the stage to welcome the crowd to the annual event.

Zoila Gomez took the stage throughout the evening to discuss  the important and unmet needs of educational equity in our community, a handful of community members from different organizations, including The Colorado Trust, Boys and Girls Club, Adams State University, Immigrant Resource Center, Colorado Housing and Finance Authority (CHFA) and active community member Zoila Gomez created the Zoila Gomez Si Se Puede (ZGSSP) Scholarship for local undocumented and Deferred Action for Childhood Arrivals (DACA) students in our community, the San Luis Valley. After receiving several donations, including one for $25,000 from CHFA, the ZGSSP Scholarship Committee was able to provide a total of $8,000 to 4 deserving students ($2,000 each) to help them pursue their higher education goals for the 2021-22 academic year. The ZGSSP Scholarship was created to support undocumented students pursuing higher education, as they do not qualify for federal financial aid. Education is paramount to breaking the cycle of generational poverty for students and their families.  Fundraising is ongoing for this scholarship.

Los Vecinos Bailadores took the stage next performing traditional dances of Hispano culture.  Their performance moved to the street inviting attendees of the block party to partake in beautiful traditional dancing. 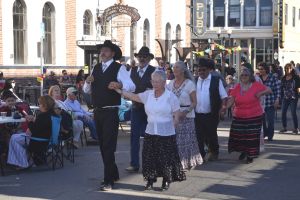 Katie Dokson of the Maestas Commemoration Committee followed next to discuss the celebration of Cinco de Mayo, it’s importance to the area, and the nation’s earliest and longest-unheralded victory in the war against Hispano/Mestizo educational segregation that took place in Alamosa, CO. In 1912, The Hispano children of Alamosa were forced to attend a separate school on the south side of the tracks. The Alamosa School Board at the time argued that the Spanish speaking students needed language support and they should attend classes taught in Spanish in their own school building. Despite the fact that the area had long been a part of the United States, and the families were American citizens, the reference was made to “Mexican” and “American” families. Francisco Maestas and other members of the community tried to switch their children’s school to the English speaking school because their children were fluent in English. They were denied. They petitioned for change with a resolution that was signed by 180 families. They were denied. They staged a boycott in protest, an action the school district later seized upon to claim Maestas wasn’t interested in his son’s educational progress. The boycott went on for three months. They organized further and with the help of the SPMDTU they took the school district to court. And won.

Azarel Madrigal of 1st Southwest Community Fund spoke about the Fortaleza fund which is designed to give access to funding and education for immigrant entrepreneurs and small businesses in rural Colorado through loans, education, and technical assistance. The Fortaleza Fund will offer loans of $10,000-$50,000 and focus on providing accessible

capital for immigrant entrepreneurs.  This program is dedicated to supporting diverse multicultural and multilingual businesses.

Anna Lee Vargas, Sangre de Cristo National Heritage Area spoke of the importance, support, and efforts of reauthorization of the heritage in Congress.Despues, from Taos, NM took the stage with their Spanish rock and had the crowd on their feet dancing for the remainder of the night.