The History of the Emperius Building

The History of the Emperius Building 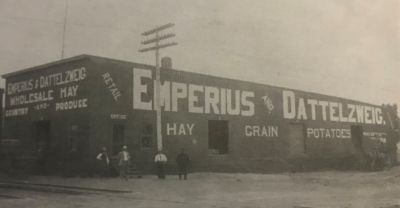 Just two years after Colorado became a state, a narrow-gauge train loaded with expectant settlers and their belongings stopped at a protected bend in the Rio Grande shaded by a grove of cottonwoods. In 1878 Alamosa—Spanish for cottonwood grove—was founded and is currently the largest town in the Sangre de Cristo National Heritage Area.

During the early 1900s Alamosa grew to become the center of transportation, commerce and agriculture in the San Luis Valley. Many of the people that came on that train were German immigrants interested in the availability of opportunities in new towns and the abundance of cheap lands. Many of these immigrants had first settled in Chicago. After Chicago’s great fire of 1871, when the city was destroyed and thousands lost their lives and homes, a great exodus of families came westward in hopes of a new beginning. One of these newcomers to the San Luis Valley was the Emperius Family, who first settled in Del Norte then moved to the Alamosa. 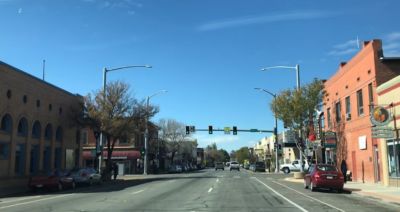 Theo Emperius started the Chicago Meat Market on State Ave and Main St. in Alamosa which was later renamed the Emperius Bros. Meat Market when his sons Herman and Fritz Emperuis took it over. The brothers soon expanded their enterpise to include their own agricultural businesses. Fritz Emperius took over the meat market and livestock while Herman started a new business, the firm of Emperius & Dattelzweig bought, sold and shipped livestock, hides, pelts, hay, grain and farm produce.

After great success, Herman Emperius was ready to take on a new challenge that benefited his own ambitions as well as the community he cared so much about. He wanted to develop a property in the heart of Alamosa. Originally in Alamosa, wooden commercial buildings had been erected on 6th Street across from the Denver and Rio Grande Railroad tracks, and then north on State Ave. In the early 1900’s more architecturally sound masonry structures began to appear, and Herman Emperius is credited with two that still stand today: the Emperius Building(1908) and the American National Bank Building(1909). 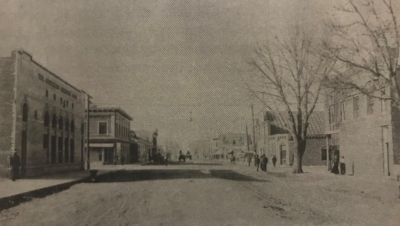 The highly visible 50-foot by 56-foot, two story red brick Emperius Building, sometimes called the Emperius Block, was constructed on the family’s property that once was home to Emperius Bros. Meat Market. Its construction typifies the construction of buildings during Alamosa’s boom years around 1910-1920s. The smooth brick exterior, corbelling, prominent chimneys at the parapets and other brickwork details distinguish the commercial block construction. It served retail businesses on the ground floor. One of the renters was the studio of O.T. Davis, as well-known local photographer. On the second floor were offices, with a stairway providing access from Main St, as it still does. Among the offices upstairs were town offices, the Alamosa Empire newspaper, and the office of then-State Senator and close friend of Herman, William H. Adams who founded Adams State.

Herman Emperius went on the get involved with banking, the Alamosa Electric and Power company, went on to serve four-terms as Mayor of Alamosa, helped to found Alamosa County and became Alamosa County’s first County Commissioner, and later a mining company. He did not abandon his downtown development plan, and in the 1920’s, he tore down the family home on State Ave to make way for the construction of a one-story addition to the Emperius Building that extended north to the alley. These rental spaces opened onto State Ave’s sidewalk, and space in the main block was subdivided. Emperius also built an addition on the east side of the Emperius Building, now called the mall, from Main St. to the back alley. These new spaces housed a variety of businesses and offices, including the San Luis Hotel, and auto showroom and garage, an appliance store, and a bowling alley managed by Fritz’s son Ted. The family sold the entire Emperius Block in 1975 and most recently, the Milagros Coffee House, operated by La Puente Home, has occupied the ground level at the corner of State and Main.

If Alamosa is the hub of the San Luis Valley, then, for many community members, Milagros Coffee House is the social and cultural hub of downtown. Milagros was originally operated as a job readiness program site but the board of directors soon realized that it functioned very effectively as Alamosa’s “Community Living Room”. This open, sunny, colorful ad friendly place welcomes people who are homeless, as well as attorneys, teachers, students, tourists, families and others who pass through downtown Alamosa. This gathering place embodies the characteristics, heritage, and purpose of serving people wholeheartedly in the same spirit of its’ creator, Herman Emperius.

The Sangre de Cristo National Heritage Area is home to Colorado’s oldest agricultural, Hispano and railroad communities. With over 11,000 years of documented inhabitation, this is where Colorado began. Learn more at www.SdCNHA.org