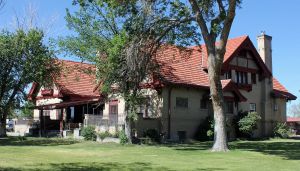 Fred Warshauer was born in Posen in 1859, he was a Polish Jew who left Europe to avoid being drafted into the Prussian army. He lived in poverty until he came to the United States and settled in Conejos County in 1879. When he settled in the United States he hardly knew any English. He was employed by a local mercantile, where he learned English and Spanish, as well as the merchandising business.  In 1889, Fred went into business for himself as a real estate and loan agent.

He successfully established himself in banking and lumbering. Where Fred Warshauer gained his wealth was in real estate, and the production of sheep and wool. In 1912, he hired George F. Harvey to design his European style mansion in the heart of Antonito Colorado. He didn’t live long in the mansion; in 1913 Fred had been suffering from depression and other illnesses that caused him to unfortunately take his own life.

The mansion is built of pressed brick and stucco with two stories and a basement. The largest room has beautiful murals, a fireplace, and shelves covering the walls.  The mansion has four tall chimneys, two in the front and two in the back, with a fifth chimney in the center rear of the house. It was built with a central vacuum cleaning system, a fire control system, steam heating system, and intercom system.  The Warshauer Mansion has been used as a restaurant, a home, other businesses, and is now home to the Antonito Town Hall.