Water has shaped the history of the Sangre de Cristo National Heritage Area, as it is the lifeblood of its people. Every culture in the San Luis Valley since the first hunters and gatherers has been shaped by the relationship of its people to water. Early Spanish explorers named each waterway to honor a saint or describe its vegetation or character. Colonists settled near streams or rivers, where water could easily be carried for cooking, washing and irrigation. 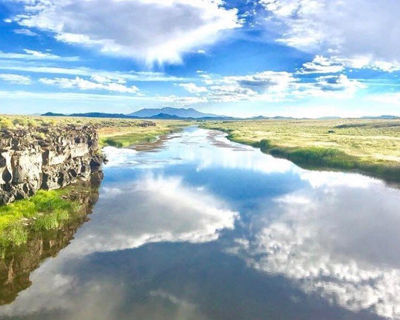 The agricultural fields of the San Luis Valley are irrigated in two ways: gravity-flow surface ditches, also known as acequias, and mechanized circle pivot irrigation. Acequias were the historic means of irrigation. Acequias, which are community-operated canal systems that carry snow runoff or river water to distant fields, evolved over 10,000 years in the deserts of the Middle East and were introduced into southern Spain by the Moors during their nearly 800-year occupation. Spanish colonizers took acequias to the New World where they were blended with similar irrigation systems of the Native Americans. Acequias include specific governance over water distribution, water scarcity plans, and all other matters pertaining to what is viewed as a communal resource. The mayordomo, or watermaster, of the acequia makes decisions about water distribution among community members, with the consent and advice of the acequia members. Each member has one vote, and so each member is an equal in the decision-making process. The farmers around the town of San Luis and surrounding villages own their irrigation water in common, following the acequia system established by these early Culebra River communities. Each ditch company holds regular meetings, elects a board, and designates a mayordomo to administer the system.

The first acequia was the San Luis People’s Ditch, which was dug in 1851. Being the oldest in the valley, the People’s Ditch also holds the first adjudicated water rights in the state of Colorado. Currently it irrigates approximately 2,100 acres of hay and other row crops. A majority of parciantes, or stakeholders, are descendants of the original founders of the acequia.

Within the heritage area, there are approximately 130 named gravity-flow irrigation ditches comprising approximately 1,300 miles of irrigation channel. While most of these ditches divert water from rivers and streams, others channel water directly from flowing artesian wells and springs.

The longest and most complex irrigation system in the San Luis Valley is the Rio Grande Canal, which began construction in 1881. While most of its 210 miles of canals and laterals provide water to Rio Grande and Saguache counties, many miles of this system also irrigate western Alamosa County. Completed in 1884, the canal’s main channel is 60 feet wide at the bottom, 90 feet wide at the top, five feet deep at the sides, and six feet deep in the middle. Today, 31 prior appropriations take 1,699 cubic feet per second of water from the canal. In an average year, 30 percent of the Rio Grande’s water is diverted into this canal system.

Mechanized center pivot irrigation, which was introduced to the valley in the 1950s, began to tap the tremendous amount of water available in the confined aquifers. While the aquifers had been tapped as early as the late 1800s through drilled artesian wells to provide surface flow to ditches, the center pivot irrigation system provided a much more efficient method of distributing the water. This system is based on a well being dug in the center of a field and an irrigation pipe mounted on wheels gradually moving around the well. This arrangement forms circular field patterns. Most of the center pivot systems are found in the northwest portion of the valley, mainly in Saguache, Rio Grande, and Alamosa counties. These counties were organized under the Public Land Survey system with the basic land parcel being the quarter section, 160 acres. Since the initial center pivot systems were designed chiefly for quarter section land parcels on the Great Plains, it was relatively easy to apply the technology to similar areas under the Public Land Survey system. 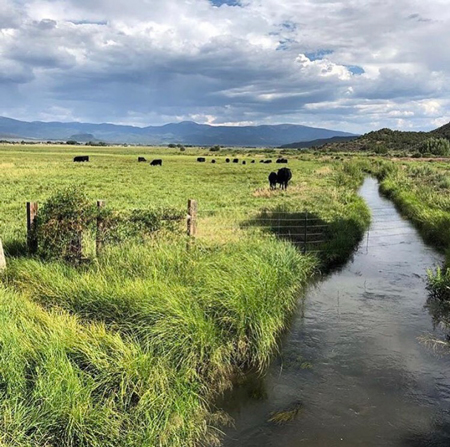 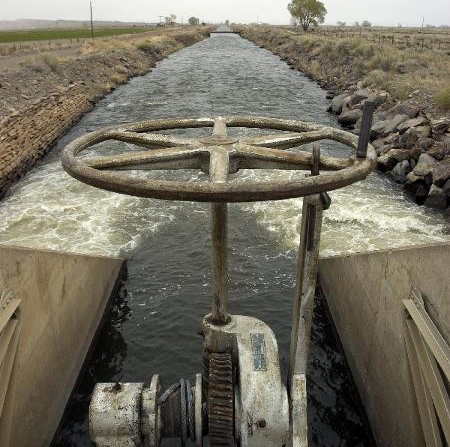 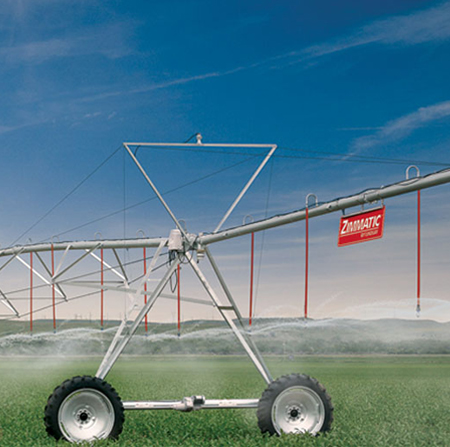 It is not possible to discuss the Rio Grande or any of its tributaries without recognizing the complex interconnectivity of the entire hydrologic system that is the Rio Grande Basin. This includes the mountain streams and underground aquifers discussed above, as well as the underlying alluvial deposits of sand and clay that lie under the valley floor. Yet the Rio Grande itself is the most well-known water feature within the heritage area, for it is the longest, widest, most visible, and continuous water body within the San Luis Valley. 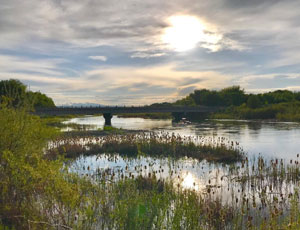 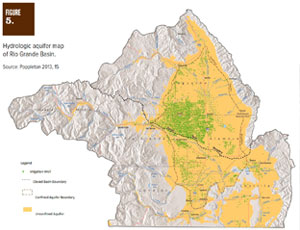 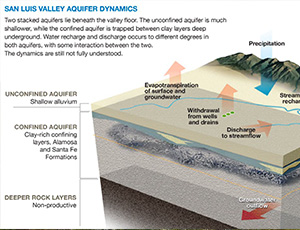 Most of the water entering the Sangre de Cristo National Heritage Area originates from rainfall that channels into mountain streams high above the valley floor. In the southern portion of the San Luis Valley these streams merge into rivers and creeks that serve as tributaries to the Rio Grande. Among these are Rock Creek, Alamosa River, La Jara Creek, Conejos River, and San Antonio River from the west; and Trinchera Creek, Culebra Creek, and Costilla Creek from the east. North of Alamosa, no mountain streams reach the Rio Grande because surface waters disappear into the gravel and sands contained within the valley floor. Among others, these include Saguache Creek, Medano Creek, Zapata Creek, and San Luis Creek, the latter of which often disappears and reappears before reaching its destination at the San Luis Lakes.

The San Luis Lakes are located at the lowest elevation within the Alamosa Basin. They are perennial, meaning that they do not dry up, because they are fed by seepage from the underlying water table as well as by surface flow. The San Luis Lakes are primarily two separate self-contained water bodies: San Luis Lake and Head Lake. Several other smaller lakes, such as Bachelor Lake, Cotton Lake, Twin Lakes, and Dollar Lake, which are fed by feeder streams and flowing artisan wells, surround these larger water bodies.

Other smaller lakes and wetlands are found throughout the heritage area, but most are found within the Alamosa Basin north of the San Luis Hills. The largest cluster, named Dry Lakes, is found within the Blanca Wildlife Habitat Area, and within the floodplain areas of the Rio Grande to the northwest and southeast of the City of Alamosa in the form of oxbow lakes and marshes resulting from migration of the river bed. These lakes and wetlands are also associated with other major river drainages such as Sangre de Cristo and Trinchera Creeks and smaller tributaries of these stream systems. 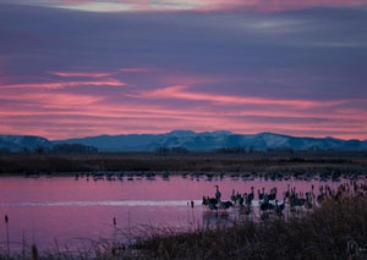 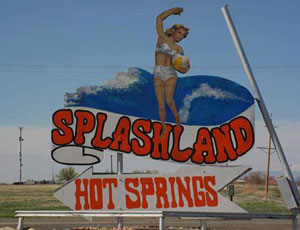 The Rio Grande Rift System extends from New Mexico through the San Luis Valley and to the upper Arkansas Valley to Leadville. This area is characterized by recent volcanic activity, tension faults, thermal springs, thermal aquifers, and high regional heat flow. In the San Luis Valley there are over 40 known geothermal wells that free flow, with temperatures ranging from 72° to 120° F. The average depth of the artesian wells are around 800 feet. The water for the wells comes from the confined aquifers deep underground. The geothermal waters are used for heating houses and businesses; providing hot water for commercial showers, laundries and swimming pools; as a source of heat for hog farrowing operations; and as a source of warm water for fish aquaculture. The hot water is blended with water in stock tanks and ponds to keep the water open in winter months. Geothermal wells are an ideal environment for alligators at the Colorado Gator Farm in Mosca. 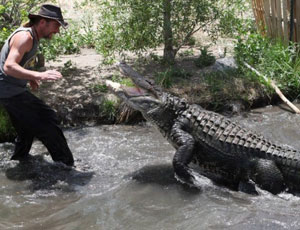 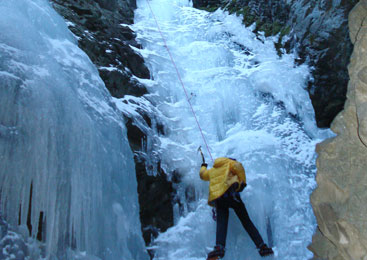 The falls were formed when South Zapata Creek wore a groove in rocks of the Sangre de Cristo Mountains. This groove allowed the melting snow runoff water and rainwater to carve through and drop 30 feet over rocks sculpted by time. To view the falls requires walking just under a mile of out and back trail, crossing a stream and climbing over some rocks. The waters can be seen flowing in the warm months and frozen in a beautiful ice sculpture in the winter. There is camping and picnic areas nearby. A great outing for a whole family. 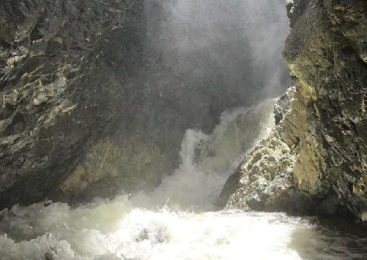 Artesian wells are free-flowing streams under pressure that spout out of the ground. Alamosa’s first town water supply was from artesian wells. Since the 1970s artesian wells must be capped and no new ones can be milled, so as to preserve the underground aquifer.

When the mountain streams sink into the porous floor of the San Luis Valley, seepage does not continue downward unimpeded. Rather, it is impounded by a relatively impermeable layer of clay that divides the upper unconfined aquifer from the lower confined aquifer. The unconfined aquifer sits on top of this impermeable layer and essentially forms the water table, which resides within the sandy alluvium and gravel subsurface of the Alamosa Basin. The depth of the confining clay layer varies from about 100 feet in the northern part of the Rio Grande Basin to about 40 feet in the southern part. There is nothing between it and the surface of the valley floor to prevent it from appearing as surface water in low lying areas, such as within lakes and creek beds. Shallow unconfined groundwater occurs almost everywhere in the valley and extends 50 to 200 feet beneath the land surface. The depth to water in about 50 percent of the valley is less than 12 feet. 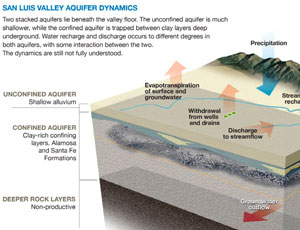 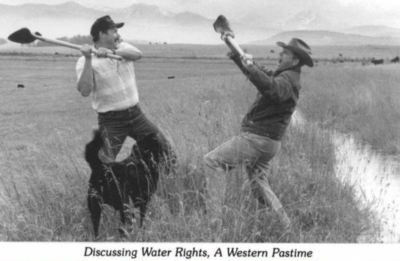 Excessive use of water in the Rio Grande Basin for irrigation and surface water has led to many economic and environmental challenges. The principal source of water for irrigation in the San Luis Valley between 1880 and 1950 was surface water. A large network of canals was built from 1880-1890 to irrigate lands in the eastern and central parts of the closed basin, including those fed by artesian wells and springs. The first drilled artesian well in the valley occurred in 1887 and within 10 years, more than 3,000 wells existed. By 1915 most of the area around Mosca and Hooper became waterlogged because of this irrigation. Drainage systems constructed between 1911 and 1921 to reclaim waterlogged lands alleviated some of the problems but created waterlogging in areas downslope.

Waterlogging causes soils to become alkaline (pH higher than 8.5), and groundwater has become highly mineralized from concentration of salts. Where salts are allowed to build up, the fertility of the soil is decreased. Excess water must be used on the fields to break up the salt and carry it back below the ground level. Pumping large volumes of water over long periods of time also uses a tremendous amount of energy. Since energy prices fluctuate, a farmer may find it difficult to judge energy costs, which is a major factor in the overall production of a crop.

By the 1880s water conflicts were occurring and the need arose to adjudicate water rights. In 1888, a General Adjudication of water rights occurred with supplements being added over the years. In addition to these adjudications, a severe drought hit the valley and other areas in 1893. This resulted in bank failures, farmers leaving the valley, the disappearance of some small communities, and the Rio Grande drying up along the Texas-Mexico border.

Eventually, the Rio Grande Compact was signed in 1938 by Colorado, New Mexico, and Texas, to equitably apportion the waters of the Rio Grande Basin. Because too much water was being taken from the Rio Grande by the valley for agricultural development and not enough was being sent downstream, Colorado had to find a means to transfer more water downstream to New Mexico, Texas, and Mexico. Initially envisioned in the 1930s, the Closed Basin Project was not started until the 1980s. Under this project, 170 wells now tap water from the unconfined aquifer and pump 100,000 acre-feet of water per year into an aqueduct that transfers the water to the Rio Grande for use downstream.

Depletion of groundwater resources in the valley spurred the Colorado legislature to adopt legislation requiring the State Engineer to promulgate new rules on future appropriations from the deeper, artesian confined aquifer. These appropriations now require an augmentation plan.